Kherson is a regional center in the south of Ukraine founded in 1778 by Hryhorii Potemkin. It is the city of shipbuilders where the history of the Black Sea fleet began.

Modern Kherson is a big river and seaport city, and the industrial and cultural center of the Kherson region. Kherson’s tourist sites, including numerous architectural and cultural places, attract thousands of tourists every year. Captivating tours via kayaks in the Dnipro delta, fishing in the estuary of the European waterway, and visiting historical sites make a vacation in Kherson pleasant and memorable.

The cathedral was built in honor of saint martyr Catherine. The central entrance is decorated with sculptures of Apostles Peter and Paul, the iconostasis is painted by famous artists D. Levytskyi and V. Borovykovskyi. Near the cathedral there is a pantheon where the officers who fell in the Russian-Turkish war are buried. 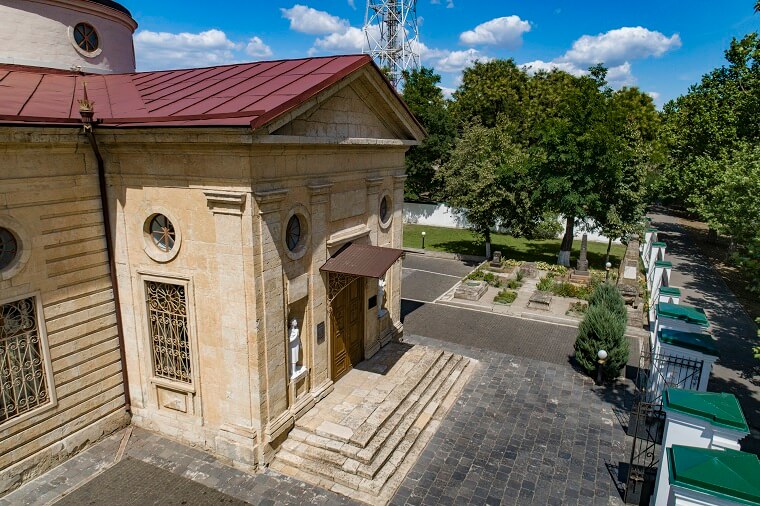 St. Catherine Cathedral is the sepulcher of H.Potemkin under whose supervision the orthodox temple and Kherson fortress were constructed within 1781-1786. According to the initial design, Kherson was to become the southern St. Petersburg, and the cathedral was one of the steps to achieve that goal. The statues of Apostles Peter and Paul at the central entrance have symbolic meaning. One of them keeps the keys from the South, the earthly paradise; the other has the sword by which the keys are obtained in heavy battles. The place is full of architectural symbols which tell the history of Kherson’s founding and its name.

Nowadays it is a well-kept, green territory which is worth walking along. You want to read commemorative plaques, view the sculptures of apostles and the cathedral’s architecture, and to attend the church service. Tourist guides will tell a lot of interesting facts about the sight.

The Cathedral of the Dormition 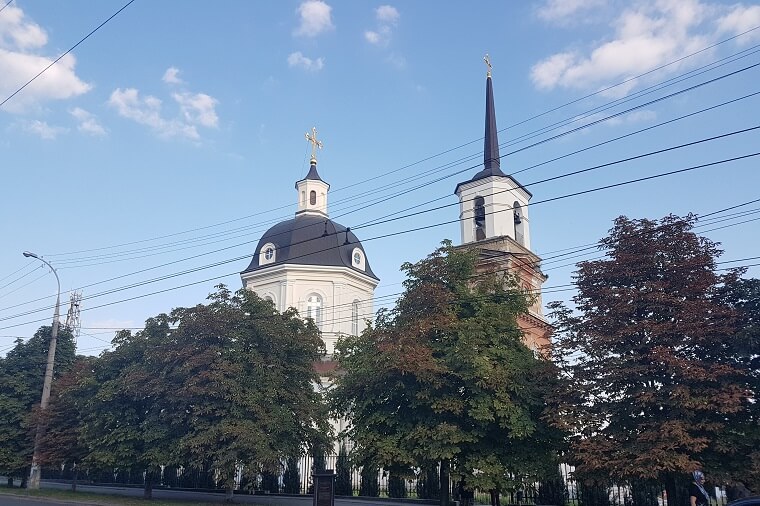 One of the oldest stone buildings in the city is the Cathedral of Dormition. The construction of the temple lasted from 1785 to 1798. It started with a parochial church, and now it is a duomo. In 1852 the first procession of the Cross with Kasperivska Icon of the Mother of the God took place; and in 1885 Emperor Oleksandr II visited the Cathedral of Dormition. In 1930 it was closed and 50 icons of exceptional historical value were stolen. The only one Beneficial Sky remained. In 1931, owners of a local factory named after Petrovskiy needed a sports hall for their workers, so they took the cathedral and used it for this purpose. In 1993 the cathedral was given back to the Orthodox Church and public worship resumed.

One of the oldest religious city sights is Greek Sofiia Church founded by the Greek colonists in 1780 and is now more than 450 years old. At first the church was wooden, but in 1808 it was converted into stone. The church has unique carved wooden iconostasis in the Italian renaissance style brought by the Greeks. The interior is decorated with paintings which have been preserved since the temple was founded.

The Church of the Sacred Heart of Jesus 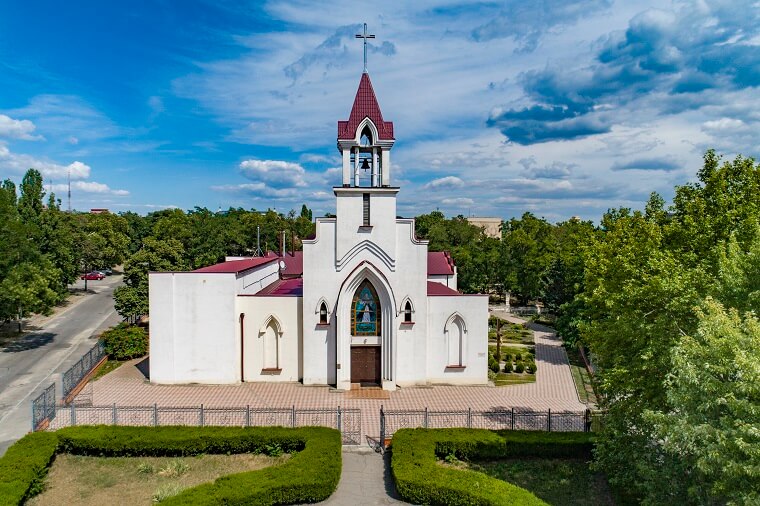 Roman Catholic Church of the Sacred Heart was constructed in 1787. At first the building was wooden but in 1820 it was rebuilt with stone. Twenty years later a tower was built nearby and in 1849 it was consecrated as a cathedral. In 1931 the Soviet government closed the temple. Later the building was used for a workshop and children’s cinema theatre named after Pavlik Morozov. In 1994 the church was given back to the Catholic Community. After refurbishment the bell and cross were installed on the tower. 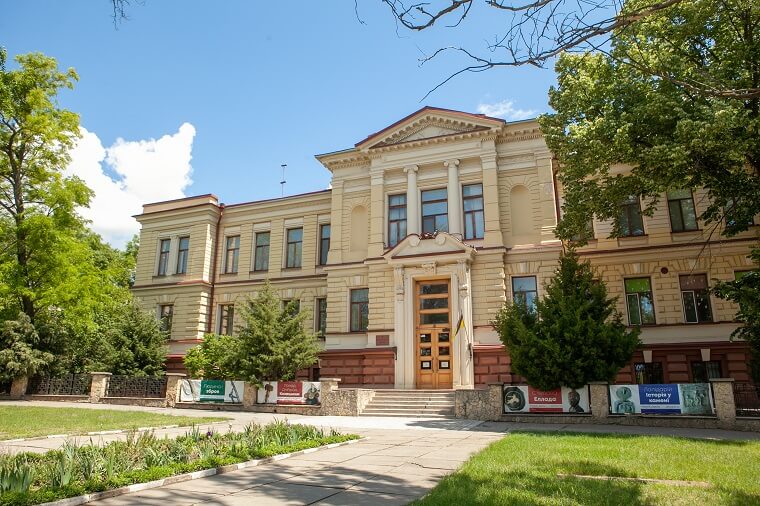 Kherson Local Lore Museum was established in 1890 based on the collection of ancient historical and cultural valuables of archeologist Viktor Hoshkevych. Since 1978 the museum is located in the building of the former County Court constructed in 1898. There are about 145,000 exhibits in the museum. You should visit it to look over the collection of antique coins from the cities of the northern Black Sea region, the sets of golden Scythian jewelry, and armory from the 15-20th centuries A.D. The special place is dedicated to expositions about H.Potemkin, O.Suvorov, F.Ushakov. 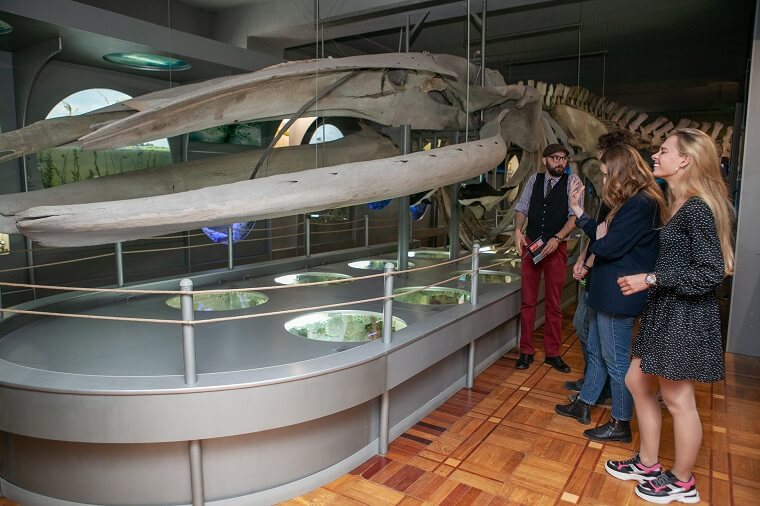 The Nature Museum is established by the initiative of the biologist scientist Josef Pachoskyi who collected herbaria, insects, and stuffed animals living in Kherson region. In 1902 he made a petition to found the museum of flora and fauna. In 1905 the museum was built. Nowadays it encompasses the collections of various insects, fish, birds, exotic mammals such as a snow leopard and polar bear. The most valuable exhibit is the skeleton of a 30-meter fin whale which is second in size to a blue whale.

One of the most beautiful buildings with an exuberant facade was given to the Art Museum named after O.Shovkunenko. It was built in 1906 and at first belonged to the City Council. The collection of works of arts was formed since late 19 century and was replenished with archeological and numismatic findings, ancient icons, and paintings. 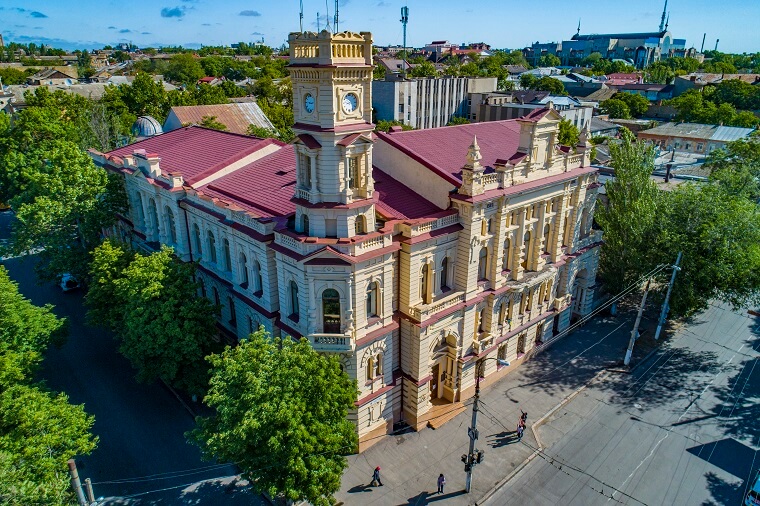 In 1976 the collector from Leningrad (St.Petersburg) M.Kornilovskyi donated 500 paintings to the museum. In 1981 more than 100 works of the local painter O.Shovkunenko were given to the museum collection too. Nowadays there are about 7,000 exhibits. 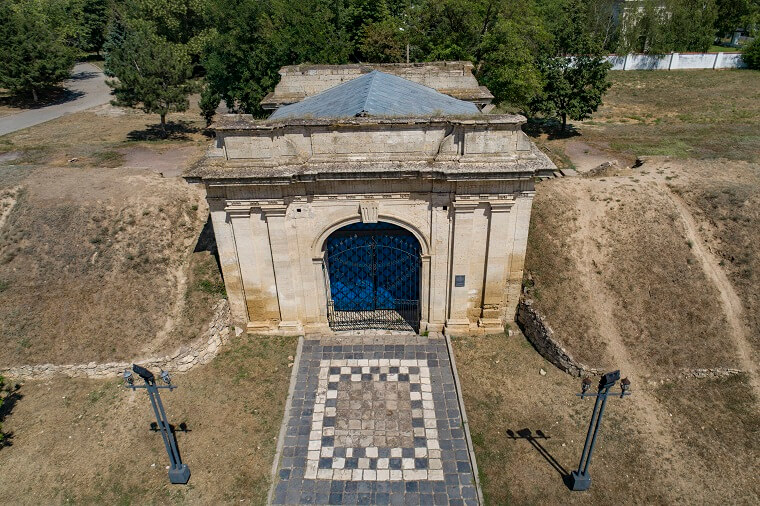 The Kherson Fortress, built by Prince H.Potemkin in 1778, is worth visiting while in Kherson. The fortress was surrounded with an earth rampart with nine strongholds and a deep ditch serving as a barrier to enemies. The arched gates (Moscow and Ochakiv Gates); a powder depot which is now converted into a restaurant; a fortress water-well; some fragments of the rampart and ravelins; armory building constructed in late 18 century are still preserved and fascinating to see.

The Park of Glory (Park Slavy) One of the distinguished places for Kherson residents is the Park of Glory built to commemorate the victory in World War II. In 1966, the remains of an Unknown Soldier were found on the banks of the Dnipro and the Tomb of the Unknown Soldier and the Eternal Fire was created in that spot. Nearby, stands the Monument of Glory.

The memorial contains the last names of the heroes who died while liberating Kherson. A legendary T-34 tank stands at the entrance of the memorial complex. There is also a monument to “The Mournful Mother” in honor of young warriors who died in Afghanistan. From the Monument of Glory there are steps leading to the river with a beautiful view of the Dnipro river.

The Monument to Suvorov 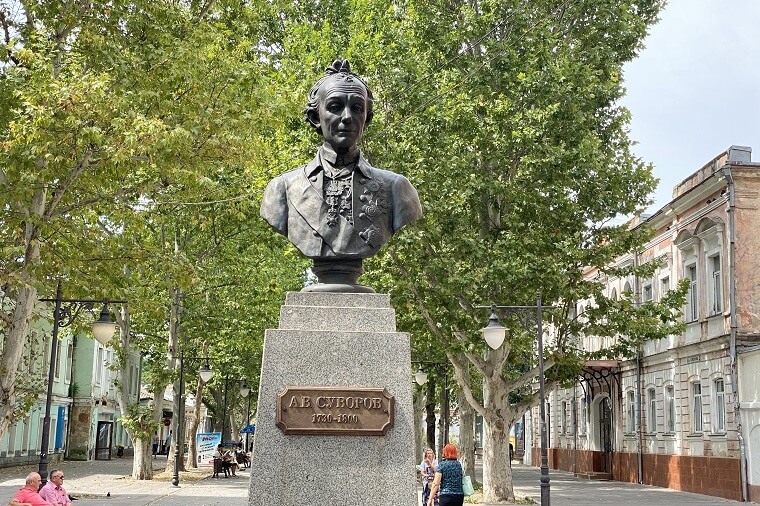 The Monument to Suvorov, made in 1904, is a portrait sculpture made of bronze by the Russian sculpture M.Rukavishnykov based on Suvorov’s death mask. Later the bust was donated to the Museum named after O.Suvorov in Petersburg. The Generalissimo is depicted with shoulder boards, honors, and a ribbon over the shoulder. In the 1950s, the employees of the museum presented the sculpture to Kherson. It is erected at the beginning of the namesake pedestrian street. Nearby there is a bas-relief dedicated to warriors fighting the enemy under Suvorov’s command.

You can visit all sights of Kherson in couple of days. However, it is not worth depriving yourself from pleasure and unforgettable experience while visiting other interesting places of the Kherson region.

It is truly peculiar for modern Ukrainians to live on an island! No doubt quite a few would like to find shelter from the bustle of …

The Kherson region occupies the Southern part of the Black Sea Plains in the steppe zone of Ukraine. The moderate continental climate dominates in the region …

It is truly peculiar for modern Ukrainians to live on an island! No doubt quite a few would like to find shelter from the bustle of ...

The Kherson region occupies the Southern part of the Black Sea Plains in the steppe zone of Ukraine. The moderate continental climate dominates in the region ...