It is truly peculiar for modern Ukrainians to live on an island! No doubt quite a few would like to find shelter from the bustle of city-life and indulge in unity with nature.

It is not uncommon that tourists, having visited the biggest island of Ukraine – Dzharylhach, keep on exploring smaller islands. Fortunately, there are a lot of them! They differ in sizes – some of them are minute while others are rich in history of great events and people. Zmiinyi, Berezan, Khortytsia, Trukhaniv are a few islands absolutely worth visiting. The majority of them don’t have bridges to join them with the mainland and are only accessible by fording or by boat.

We have come up with the collection of 7 amazing islands in southern Ukraine. You will be able to move a bit closer to them, to compare them against each other and choose the ideal location for your weekend or overall vacation.

Dzharylhach is uninhabited and the biggest island in Ukraine. It is located 100 km from the city of Kherson. Its square area is 56 km2; its length is 42 km. You can go there most conveniently by ferryboat or by boat from Skadovsk.

The place is called Ukrainian Maldives because of its white cotton sand and crystal clean blue water. The beaches are miraculously turtle-studded and dolphins swim close to the coast. You can watch at great length the way they play, spring above the water, catch fish.

The local flora accounts for about 500 plants among which there are 7 species of rare orchids. Local salt lakes and therapeutic muds also attract attention of tourists. Close to the lakes you can see a lagoon where swans usually swim.

You can take an ecosafari on the local soil road (27 km) where you will see mouflons, wild horses, deer and the other animals in their natural habitat.

Biriuchyi – an island or spit? 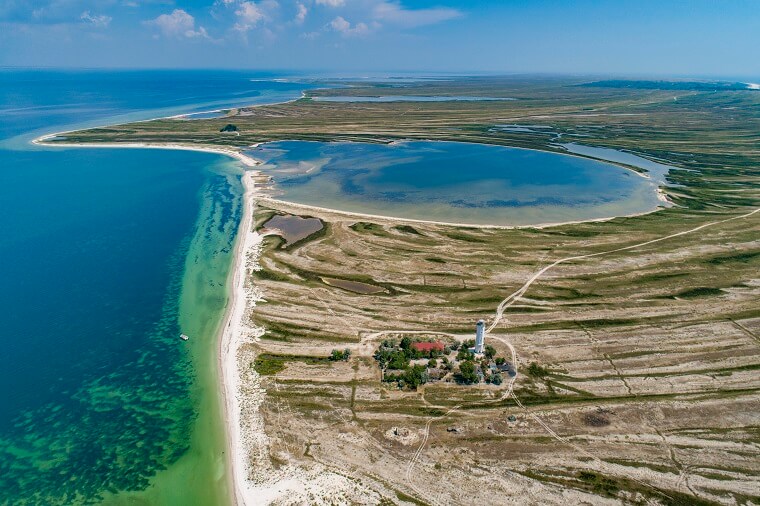 Actually, it is a spit. But periodically its land bridge goes totally under water and the territory turns into an island. Here wide beaches immediately strike the eye. Biriuchyi is part of the Azov and Syvash National Park. You can go to the island by boat from Henichesk, Strivkove and Schaslivtseve. 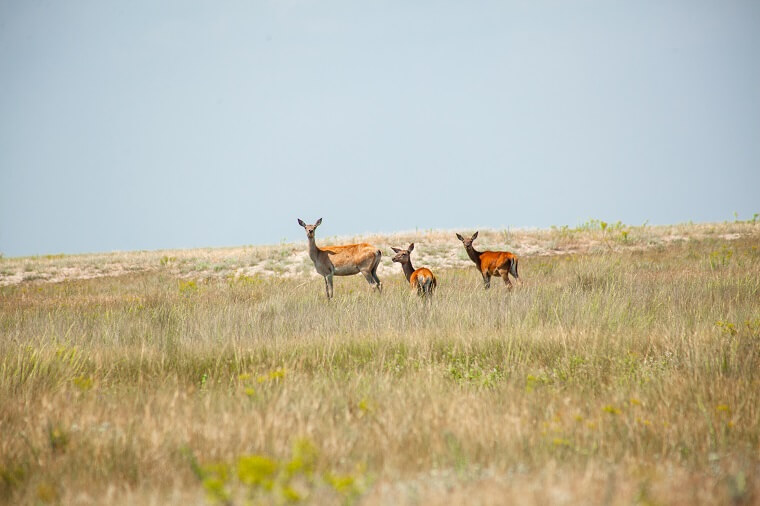 Local landscapes are mixture of desert sandy beaches and steppe wild grasses. It is here where deciduary trees grow among which there are one-hundred-year-old mighty oaks. Time and again you can see deer, fallow deer, foxes, and raccoon dogs here. Wild ducks and many other birds nest in reed thicket close to the coastline.

The inhabited island is located opposite Hola Prystan in the Dnipro delta and is only accessible by boat. You can’t help but mention it while talking about amazing islands of Ukraine. There is a fishing settlement here and its population is about 300 people. 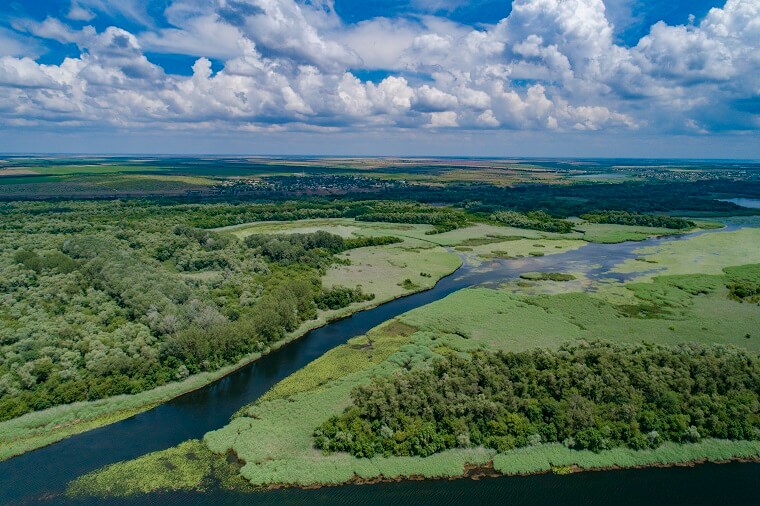 The location is exotic and picturesque for tourists. There is almost no vehicle transport here with only soil roads but there is electricity. A great number of rare plants, particularly medicinal ones, grow on the island.

Not all the Ukrainian islands have a natural origin. For example, Travnevyi was created artificially as an outpost. Once it blocked the fairway to Turkish ships. It is the most enigmatic island of Ukraine located in the estuary of the Dnipro-Bug firth just in the place where it joins with briny waters of the Black Sea. The story of its construction is unknown, but there its history dates back to about 1877.

The island is on piles pitched into the soil. Stones, sand, and clay are the layers above them. The dry land area is about 7 hectares.

In 20th century there was a secret brigade of Special Operation Forces. The soldiers mastered their skills of undersea warfare. The troops were trained to hit the targets underwater, from the air, and from the land.

Today the island is used as a training base for Ukrainian military people. There Ukrainian Navy SEALs and swimmers are trained, the competition for the latter are conducted on the island as well.

This is one of the numerous islands in Dnipro flood plains located not far from the Koshova river. The origin of the name is very interesting: soon after Kherson had been founded, this island served as a place for newly-arrived ships to quarantine to prevent an outbreak of a plague. 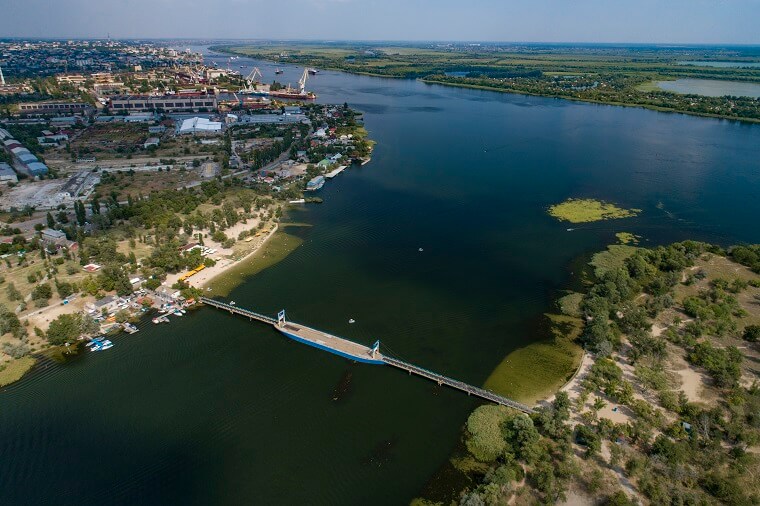 Even though the island is  big, only a small part of it, the eastern one, is good to be inhabited. All the other territory is marshland grown over with reed which is difficult to pass through. The Koshova river as well as the other delta of the Dnipro is a popular fishing place. It is not comfortable to swim here because of great amount of seaweed.

Verbliudka Island – the island with the Crimean soul

If talking about wonderful islands in Ukraine, you can’t miss Verbliudka, located in Kherson region close to the borderline with Crimea. You can go there by car up to the border with Azov and Syvash National park on the sand spit then you have to walk via sandy beaches and the Syvash bottom (fording).

The island itself is not very big – 3 km long and up to 400 m wide while the height of the banks is about 5-7 m. It looks especially beautiful in spring. Tourists are fascinated by the exuberant steppe where Shrenk`s tulips from the Red List grow. The flower meadow makes a striking impression due to the aroma mixture filling the air – sea breeze, lush grasses and flowers.

You will have a wonderful time on the deserted island Churiuk located in the western part of the Syvash bay in the Azov Sea. Its square area is a bit less than 10 km. Since 1923 it is incorporated into the Biosphere reserve Askania Nova. It has a road connection with the mainland and an artificial land bridge to another island.

Vegetation of the island is aridic, steppe-like (fescue – feather grass), and pseudosteppe. Among a great number of plants there are some of the Red List.

Kherson is a regional center in the south of Ukraine founded in 1778 by Hryhorii Potemkin. It is the city of shipbuilders where the history of …

The Kherson region occupies the Southern part of the Black Sea Plains in the steppe zone of Ukraine. The moderate continental climate dominates in the region …

Kherson is a regional center in the south of Ukraine founded in 1778 by Hryhorii Potemkin. It is the city of shipbuilders where the history of ...

The Kherson region occupies the Southern part of the Black Sea Plains in the steppe zone of Ukraine. The moderate continental climate dominates in the region ...