The history of the Osokorivsky Catacombs

The Osokorivsky Catacombs. That’s how local citizens call an abandoned limestone mine. Its field development was begun in 1997. Remarkably, the quarry was established just a few years later. Osokorivka village was founded by escaped peasants in 1783. The settlement entered the 20th century as a solid landed property. But in 1905, it was devastated. In Soviet times, a collective farm was established here. It grew vegetables, fruits and raised cattle to eat on the territory of the village. Moreover, there were even mill and cannery. But as for the quarry, no mentions of it were found.

But why weren’t, so rich limestone deposits mined until the 21st century? The first theory is that the local citizens found no sense in it, as it was easier to deliver the rock from Dnipro or Kryvyi Rih than to develop the production here. The second assumption is that the village focused only on agriculture activities. However, there was no problem for Soviet authorities to develop the heavy industry from nothing. The most believable assumption holds that the local citizens actually mined limestone here, but the scales were so small. That’s why there is no information about mining activities and volumes of production in the village. Anyway, history is silent about the Osokorivsky Catacombs. Only locals can provide inside information about this place. There’s one thing for sure, the mine is abandoned at the moment.

Nevertheless, no matter when and why the quarry was established. The Osokorivsky Catacombs attract tourists, not for their history, but their mysterious atmosphere. Just imagine a straight tunnel, darkness, and suspense that await you at every turn. Your skin crawls with fear in such an atmosphere. That’s exactly why you need to visit the abandoned mine!

The  Osokorivsky Catacombs don’t differ from ordinary mines. You’ll see several sharp rectangular apertures. They open into the mine. The quarry is a network of labyrinths that extends for several tens of miles. The mine’s tunnels are straight. The size of every tunnel is about 3 m x 4 m. The catacombs’ walls are dissected with straight lines, as required by the production technique. It helped the specialized equipment to split monolithic blocks and deliver the rocks outside.

There are figures in some places of the catacombs. But it’s unknown what these notes mean. Probably, they indicate the year, distance from the entrance, or something else. No one knows. The size of the mining claim is 75 hectares, so it’s very easy to get lost.

According to the calculations, limestone reserves are estimated to be 23.500 cubic meters. Limestone is a great material to produce limestone dust, rocks (like coquina), stone veneers, etc.

The underground labyrinths attract daydreamers, thrill-seekers, and tourists. And it’s not surprising, as the atmosphere is breathtaking. Just try to explore pitch-dark straight tunnels, suspense at every turn, and buttress timber beams. Anyway, the journey will rattle your nerves.

f you have no experience in exploring underground labyrinths, it’s better to go into the catacombs under escort. Pay attention that some parts of the mine are in a state of disrepair. If you want to feel the power of the catacombs, it’s better to book a guided tour. For example, travel agencies regularly arrange one-day trips to the Osokorivsky Catacombs from Kryvyi Rih. More details @dungion_kr

What to take with you on a trip to the mine:

Be prepared for the unexpected - the catacombs have long been a favorite of bats. Light and movement can scare them away. Do not forget about safety and inform your relatives about the trip.

How to get to the Osokorivsky Catacombs

The catacombs are located in Osokorivka village of the Novovorontsovka District. You can reach the place by car. Just follow the M-14 route that goes through Beryslav and Novokairy.

You can also get to the catacombs by public transport. You should go to the bus station in Kherson (Polkovnyka Kedrovskoho Street, 1) and take the bus to Novovorontsovka or Vysokopillya.

The Osokorivsky Catacombs on the map

Comments: Secrets of the Osokorivsky Catacombs 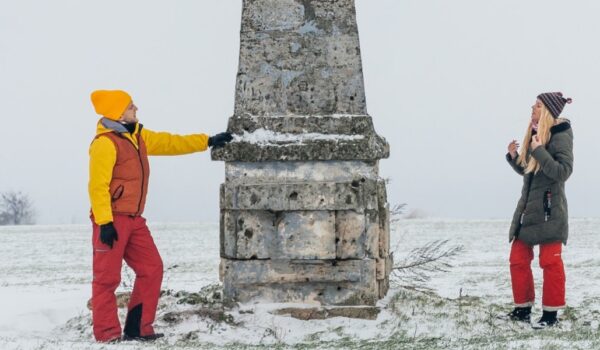